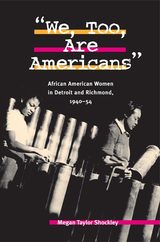 We, Too, Are Americans: African American Women in Detroit and Richmond, 1940-54
by Megan Taylor Shockley
University of Illinois Press, 2003
Cloth: 978-0-252-02863-2
During World War II, factories across America retooled for wartime production, and unprecedented labor opportunities opened up for women and minorities. In We, Too, Are Americans, Megan Taylor Shockley examines the experiences of the African American women who worked in two capitols of industry--Detroit, Michigan, and Richmond, Virginia--during the war and the decade that followed it, making a compelling case for viewing World War II as the crucible of the civil rights movement.

As demands on them intensified, the women working to provide American troops with clothing, medical supplies, and other services became increasingly aware of their key role in the war effort. A considerable number of the African Americans among them began to use their indispensability to leverage demands for equal employment, welfare and citizenship benefits, fair treatment, good working conditions, and other considerations previously denied them.

Shockley shows that as these women strove to redefine citizenship, backing up their claims to equality with lawsuits, sit-ins, and other forms of activism, they were forging tools that civil rights activists would continue to use in the years to come.