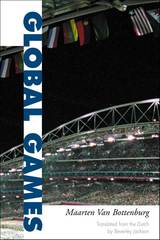 Global Games
by Maarten Van Bottenburg and Beverley Jackson
University of Illinois Press, 2001
Cloth: 978-0-252-02654-6
Why is soccer the sport of choice in South America while baseball soared to popularity in the Caribbean? How did cricket become India's national sport? Why is China a stronghold of table tennis?

Maarten Van Bottenburg asserts that a hidden competition of social and international relations, rather than the particular qualities of a given sport, explains who plays what sport and why. Looking at Britain, Germany, the United States, and Japan, Van Bottenburg discusses how individual sports developed, what institutions and groups spread them to other nations, and why certain sports and not others found an international audience. As he shows, the nature of the relationship between the country of origin and the adopting country help determine how successfully a sport takes hold and to what degree new practitioners modify it. Other key factors include which groups dominated and promoted the various sports in their countries of origin, which groups appropriated them elsewhere, and the latter's positions within their society's class structure.

AUTHOR BIOGRAPHY
Maarten Van Bottenburg is a professor of public administration and organization science at Utrecht University.
REVIEWS
"These data constitute the best available basis for this study, which is organized by sport and country. Although Van Bottenburg at first dismisses as simplistic factors such as climate, geography, religion, and economics, by the end of the book, he takes these factors--in combination with considerations, such as specific agencies, social class, cultural hegemony, and history--into consideration and expertly weaves them together." --Choice


"Van Bottenburg has compiled this impressive study to find out how and why a specific sport finds popularity in one country but not another. . . . An insightful, academic look at why we play."--MultiCultural Review