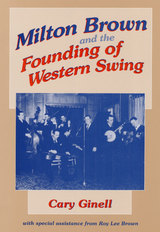 Milton Brown and the Founding of Western Swing
by Cary Ginell
University of Illinois Press, 1994
Cloth: 978-0-252-02041-4
A few weeks before his death in an auto accident, Milton Brown and his band the Musical Brownies recorded forty-nine songs in a single three-day session. That prolific output was a testament to Brown's enormous popularity not only on record but as head of the premier touring act in the Southwest. Cary Ginell draws on interviews and his own musical knowledge to chart Brown's too-short career. Ginell sees Brown as the first key figure to merge blues, jazz, and country into the genre that artists like Bob Wills and Spade Cooley later popularized as Western Swing. Following Brown from his early years to his rise via the Fort Worth dance hall scene, Ginell traces the evolution of the singer-bandleader's musical innovations like adding vocals to dance music and his band's adoption of a style heavy with rhythm and blues. In 1936, Brown and his band stood at the brink of national stardom when Brown's car hit a telephone pole. He died five days later.
AUTHOR BIOGRAPHY
Cary Ginell is a music historian, broadcaster, archivist, and Grammy-nominated writer. His books include The Discography of Western Swing and Hot String Bands, 1928-1942 and Walk Tall: The Music and Life of Julian Cannonball Adderley.
REVIEWS
Winner of the ARSC Award for Best Research in Recorded Country Music, 1995.  Recipient of Honorable Mention for the Belmont Award for the Best Book on Country Music, 1994.
— ARSC Award for Best Research in Recorded Country Music