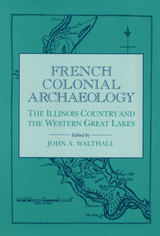 French Colonial Archaeology: The Illinois Country and the Western Great Lakes
edited by John A. Walthall
University of Illinois Press, 1991
Cloth: 978-0-252-01797-1
This wide-ranging book is the first to offer---in one volume---detailed
results of many of the investigations of French colonial sites made in
the mid-continent during the last decade. It includes work done at Fort
St. Louis, Fort de Chartres, Fort Massac, French Peoria, Cahokia, Prairie
du Pont, Prairie du Rocher, and other locations controlled by the French
during a time when their dominance in North America was more than twice
that of Britain and Spain combined.
Five of the book's fifteen chapters summarize major excavations at colonial
fortifications, four of which are public monuments that currently attract
thousands of visitors each year. Another five chapters deal with French
colonial villages, and the remainder of the book is devoted to diet, trade,
the role of historic documents in the reconstruction of life on the French
colonial frontier, and other topics.