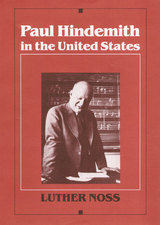 Paul Hindemith in the United States
by Luther Noss
University of Illinois Press, 1989
Cloth: 978-0-252-01563-2
Paul Hindemith (1895–1963) was one of the most influential musicians and composers of the twentieth century. His wide-ranging musical interests and prodigious gifts connected him to music as varied as neoclassicism, the avant garde, and chamber pieces for unusual groupings of instruments. The uncertainties of life under the Nazi regime led Hindemith to move to the United States in 1940. There, he taught at Yale University and composed celebrated works like Symphonic Metamorphosis of Themes by Carl Maria von Weber.

Concentrating upon the composer's first three US concert tours and his thirteen years at Yale, Luther Noss brings to life a observant, energetic, stubborn, and wry personality. Hindemith's journals offer detailed commentary on his experiences at Tanglewood while Noss draws on archives to describe the composer's groundbreaking Collegium concerts, classes, controversial plans to reorganize the School of Music, and other activities. Noss also delves into professional activity that included a huge number of commissions, writing four theory textbooks, an expansion of his Charles Eliot Norton Lectures, and numerous world premieres and other events.

AUTHOR BIOGRAPHY
Luther Noss was a professor emeritus of music, one-time dean of the School of Music, and curator of the Paul Hindemith Collection at Yale University. He died in 1995.