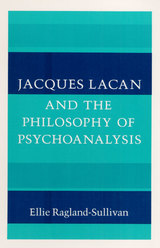 This volume is the first clear and comprehensive critical analysis of Jacques Lacan's thought for the English-speaking world.  With Jacques Lacan and the philosophy of Psychoanalysis Ellie Ragland-Sullivan not only fills that gap but also provides the foundation upon which all future studies of Lacan must build. Working principally from the legendary but seldom-analyzed Seminars, Ragland-Sullivan clarifies and synthesizes Lacan's major concepts.  Using empirical data as well as Lacan's texts, she demonstrates how Lacan's teachings constitute a new epistemology that goes far beyond conventional thinking in psychoanalysis, psychology, philosophy, and linguistics.