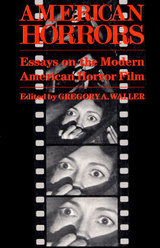 Since the release of Rosemary's Baby in 1968, the American horror film has become one of the most diverse, commercially successful, widely discussed, and culturally significant film genres. Drawing on a wide range of critical methods---from close textual readings and structuralist genre criticism to psychoanalytical, feminist, and ideological analyses---the authors examine individual films, directors, and subgenres.
In this collection of twelve essays, Gregory Waller balances detailed studies of both popular films (Night of the Living Dead, The Exorcist, and Halloween) and particularly problematic films (Don't Look Now and Eyes of Laura Mars) with discussions of such central thematic preoccupations as the genre's representation of violence and female victims, its reflexivity and playfulness, and its ongoing redefinition of the monstrous and the normal.
In addition, American Horrors includes a filmography of movies and telefilms and an annotated bibliography of books and articles about horror since 1968.