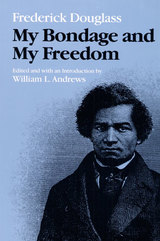 This is the first annotated edition of a work Eric J. Sundquist has called "a classic text of the American Renaissance." As Henry Louis Gates, Jr., has pointed out, My Bondage and My Freedom has been largely ignored by critics, in part because it is longer and less accessible than Narrative of the Life of Frederick Douglass but also because it has not up to now been "read" by a sensitive critic. "The latter reason is paramount and urgently needed to be addressed, and William Andrews is just the person to introduce Douglass's second autobiography to our generation of readers. He has few peers in nineteenth-century black criticism."
AUTHOR BIOGRAPHY
William L. Andrews, professor of English at the University of Wisconsin-Madison, is the author of To Tell a Free Story: The First Century of Afro-American Autobiography, 1760-1865.