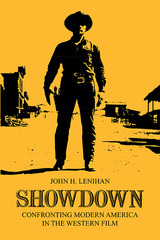 "Lenihan's fine study
[brings] new levels of scholarship and sophistication to the study of
western films.... Should prove useful in the classroom, both for social
history and film history courses. It will introduce readers to a new way
to view some of the old horse operas that they had once taken for granted
as fluffy entertainment."
-- Western American Literature
'"The best of the recent
books to deal with Westerns produced since World War II --- in fact, probably
the best recent study of the Western."
-- Journal of the West
"Recommended for the
student of film and the hardcore film buff. The rest of you will be surprised,
delighted, perhaps even angered by some of the conclusions Lenihan has
come to."
-- Film World