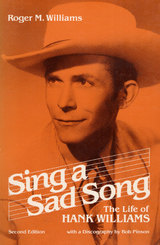 Sing a Sad Song: The Life of Hank Williams
by Roger M. Williams
University of Illinois Press, 1981
Paper: 978-0-252-00861-0
Few American entertainers have had the explosive impact, wide-ranging appeal, and continuing popularity of country music superstar Hank Williams. Such Williams standards as "Your Cheatin' Heart," "I'm So Lonesome I Could Cry," "Jambalaya," and "I Saw the Light" have entered the pantheon of great American song while Williams's very name remains synonymous with the genre he helped define.

Sing a Sad Songs tells the story of Hank Williams's rise from impoverished Alabama roots, his coming of age during and after World War II, his meteoric climb to national acclaim and star status on the Grand Ole Opry, his star-crossed marriages and recurring health problems, the chronic bouts with alcoholism and the alienation it caused in those he loved and sang for, and finally his tragic death at twenty-nine and subsequent emergence as a folk hero.

In addition, the book includes an essential discography compiled by Bob Pinson of the Country Music Foundation.

AUTHOR BIOGRAPHY
Roger M. Williams (no relation to Hank Williams) is the author of The Bonds: An American Family and was a senior editor at Saturday Review and a national magazine writer.
REVIEWS
"A must-read for anyone interested in the man and his songs."--Nick Tosches, Country Music