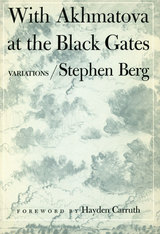 WITH AKHMATOVA AT THE BLACK GATES
by Stephen Berg
University of Illinois Press, 2000
Paper: 978-0-252-00834-4
There are few precedents for what Stephen Berg has attempted and accomplished in these poems. Not really translations, nor even versions or imitations, Berg's poems are meditations on and through the person and poetry of Anna Akhmatova (1899–1966), one of Russia's greatest poets. Akhmatova, whose life began in the Victorian twilight and spanned the days of Revolution and the era of Stalinist persecution, interwove pagan fervor with Christian austerity in poems of passionate longing for the past and lost love. Irresistibly drawn into Akhmatova's orbit, Berg "believed that I was being released from myself by writing these poems when, in fact, I was merely discovering, hearing from a part of myself I did not remember, or know."
AUTHOR BIOGRAPHY
Stephen Berg was a professor at the University of the Arts and a founder of The American Poetry Review. His previous books of poetry include Here, The Daughters, Nothing in the Word, and Grief: Poems and Versions of Poems. He died in 2014.