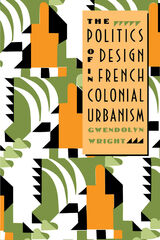 Politics and culture are at once semi-autonomous and intertwined. Nowhere is this more revealingly illustrated than in urban design, a field that encompasses architecture and social life, traditions and modernization. Here aesthetic goals and political intentions meet, sometimes in collaboration, sometimes in conflict. Here the formal qualities of art confront the complexities of history. When urban design policies are implemented, they reveal underlying aesthetic, cultural, and political dilemmas with startling clarity.

Gwendolyn Wright focuses on three French colonies—Indochina, Morocco, and Madagascar—that were the most discussed, most often photographed, and most admired showpieces of the French empire in the early twentieth century. She explores how urban policy and design fit into the French colonial policy of "association," a strategy that accepted, even encouraged, cultural differences while it promoted modern urban improvements that would foster economic development for Western investors. Wright shows how these colonial cities evolved, tracing the distinctive nature of each locale under French imperialism. She also relates these cities to the larger category of French architecture and urbanism, showing how consistently the French tried to resolve certain stylistic and policy problems they faced at home and abroad.

With the advice of architects and sociologists, art historians and geographers, colonial administrators sought to exert greater control over such matters as family life and working conditions, industrial growth and cultural memory. The issues Wright confronts—the potent implications of traditional norms, cultural continuity, modernization, and radical urban experiments—still challenge us today.
AUTHOR BIOGRAPHY
Gwendolyn Wright is professor of architecture and history at Columbia University. She is the author of Moralism and the Modern Home: Domestic Architecture and Cultural Conflict in Chicago, 1873-1913, also published by the University of Chicago Press.
TABLE OF CONTENTS