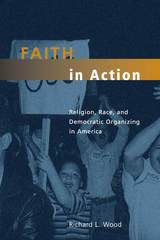 Over the past fifteen years, associations throughout the U.S. have organized citizens around issues of equality and social justice, often through local churches. But in contrast to President Bush's vision of faith-based activism, in which groups deliver social services to the needy, these associations do something greater. Drawing on institutions of faith, they reshape public policies that neglect the disadvantaged.

To find out how this faith-based form of community organizing succeeds, Richard L. Wood spent several years working with two local groups in Oakland, California—the faith-based Pacific Institute for Community Organization and the race-based Center for Third World Organizing. Comparing their activist techniques and achievements, Wood argues that the alternative cultures and strategies of these two groups give them radically different access to community ties and social capital.

Creative and insightful, Faith in Action shows how community activism and religious organizations can help build a more just and democratic future for all Americans.
AUTHOR BIOGRAPHY
Richard L. Wood is an associate professor of sociology at the University of New Mexico.
TABLE OF CONTENTS