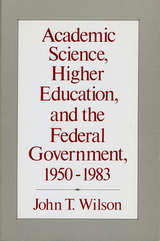 Since World War II, the federal government and institutions of higher education have shared an unprecedented association. John T. Wilson is among the relatively few people who have played roles on both sides of this relationship. In this essay, he examines the substance of the relationship with an eye to the future, reviewing the policies and programs that have governed federal support of academic science and higher education during the past thirty years.
AUTHOR BIOGRAPHY
John T. Wilson is president emeritus and professor of education at the University of Chicago. He served previously at the National Science Foundation as program director for psychology (1952-55), assistant director for biological and medical sciences (1955-61), and deputy director (1963-68).
TABLE OF CONTENTS