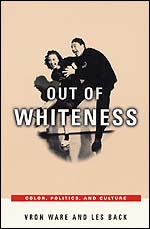 What happens when people in societies stratified by race refuse to accept the privileges inherent in whiteness? What difference does it make when whites act in a manner that contradicts their designated racial identity? Out of Whiteness considers these questions and argues passionately for an imaginative and radical politics against all forms of racism.

Vron Ware and Les Back look at key points in recent American and British culture where the "color line" has been blurred. Through probing accounts of racial masquerades in popular literature, the growth of the white power music scene on the Internet, the meteoric rise of big band jazz during the Second World War, and the pivotal role of white session players in crafting rhythm and blues classics by black artists, Ware and Back upset the idea of race as a symbol of inherent human attributes. Their book gives us a timely reckoning of the forces that continue to make people "white," and reveals to us the polyglot potential of identities and cultures.
AUTHOR BIOGRAPHY
Vron Ware is a lecturer in sociology and in women's and gender studies at Yale University. She is the author of Beyond the Pale: White Women, Racism, and History.

Les Back teaches sociology and urban studies at Goldsmiths College University of London. He is the author of New Ethnicities, Multiple Racisms: Racisms and Multiculture in Young Lives.
TABLE OF CONTENTS


Acknowledgments
Introduction: Outside the Whale
1. Otherworldly Knowledge: Toward a "Language of Perspicuous Contrast"
2. Guess Who's Coming to Dinner? The Political Morality of Investigating Whiteness in the Gray Zone
3. Seeing through Skin/Seeing through Epidermalization
4. Wagner and Power Chords: Skinheadism, White Power Music, and the Internet
5. Mothers of Invention: Good Hearts, Intelligent Minds, and Subversive Acts
6. Syncopated Synergy: Dance, Embodiment, and the Call of the Jitterbug
7. Ghosts, Trails, and Bones: Circuits of Memory and Traditions of Resistance
8. Out of Sight: Southern Music and the Coloring of Sound
9. Room with a View
Notes
Index