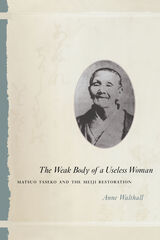 In 1862, fifty-one-year-old Matsuo Taseko left her old life behind by traveling to Kyoto, the old imperial capital. Peasant, poet, and local political activist, Taseko had come to Kyoto to support the nativist campaign to restore the Japanese emperor and expel Western "barbarians." Although she played a minor role in the events that led to the Meiji Restoration of 1868, her actions were nonetheless astonishing for a woman of her day. Honored as a hero even before her death, Taseko has since been adopted as a patron saint by rightist nationalists.

In telling Taseko's story, Anne Walthall gives us not just the first full biography in English of a peasant woman of the Tokugawa period (1603-1868), but also fresh perspectives on the practices and intellectual concerns of rural entrepreneurs and their role in the Meiji Restoration. Writing about Taseko with a depth and complexity that has thus far been accorded only to men of that time, Walthall has uncovered a tale that will captivate anyone concerned with women's lives and with Japan's dramatic transition to modernity.