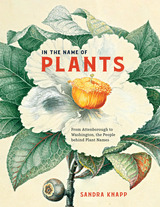 A vividly illustrated meeting with thirty plants and their inspiring namesakes

Shakespeare famously asserted that “a rose by any other name would smell as sweet,” and that’s as true for common garden roses as it is for the Megacorax, a genus of evening primroses. Though it may not sound like it, the Megacorax was actually christened in honor of famed American botanist Peter Raven, its name a play on the Latin words for “great raven.”

In this lush and lively book, celebrated botanist Sandra Knapp explores the people whose names have been immortalized in plant genera, presenting little-known stories about both the featured plants and their eponyms alongside photographs and botanical drawings from the collections of London’s Natural History Museum. Readers will see familiar plants in a new light after learning the tales of heroism, inspiration, and notoriety that led to their naming. Take, for example, nineteenth-century American botanist Alice Eastwood, after whom the yellow aster—Eastwoodia elegans—is named. Eastwood was a pioneering plant collector who also singlehandedly saved irreplaceable specimens from the California Academy of Sciences during the 1906 San Francisco earthquake. Or more recently, the fern genus Gaga, named for the pop star and actress Lady Gaga, whose verdant heart-shaped ensemble at the 2010 Grammy Awards bore a striking resemblance to a giant fern gametophyte. Knapp’s subjects range from Charles Darwin’s grandfather, Erasmus Darwin (Darwinia), and legendary French botanist Pierre Magnol—who lends his name to the magnolia tree—to US founding figures like George Washington (Washingtonia) and Benjamin Franklin (Franklinia). Including granular details on the taxonomy and habitats for thirty plants alongside its vibrant illustrations, this book is sure to entertain and enlighten any plant fan.
AUTHOR BIOGRAPHY
Sandra Knapp is a senior research botanist at the Natural History Museum in London and served as president of the Linnean Society from 2018-2022. She is the author of several books, including Flora, Alfred Russel Wallace in the Amazon, and The Gilded Canopy.
REVIEWS
“Fascinating profiles, gorgeous illustrations, and fun stories about the figures featured in plant names.”
— Meg Lowman, author of The Arbornaut: A Life Discovering the Eighth Continent in the Trees Above Us

"In In the Name of Plants Knapp has shown us how thoughtful botanists have
said it with flowers (and gymnosperms, ferns, and mosses). Not so much plants and
people as people in plants, this charming book embodies the essence of plants-and-
people and is a welcome addition to that important botanical literary genre."
— Botany One