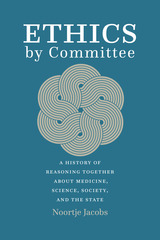 How liberal democracies in the late twentieth century have sought to resolve public concerns over charged issues in medicine and science.

Ethics boards have become obligatory passage points in today’s medical science, and we forget how novel they really are. The use of humans in experiments is an age-old practice that records show goes back to at least the third century BC, and it has been popular as a practice since the early modern period. Yet in most countries around the world, hardly any formal checks and balances existed to govern the communal oversight of experiments involving human subjects until at least the 1960s. Ethics by Committee traces the rise of ethics boards for human experimentation in the second half of the twentieth century.

Using the Netherlands as a case study, historian Noortje Jacobs shows how the authority of physicians to make decisions about clinical research in this period gave way in most developed nations to formal mechanisms of communal decision-making that served to regiment the behavior of individual researchers. This historically unprecedented change in scientific governance came out of the growing international wariness of medical research in the decades after World War II and was meant to solidify a new way of reasoning together in liberal democracies about medicine and science. But what reasoning together meant, and who was invited to participate, changed drastically over time. In detailing this history, Jacobs shows that research ethics committees were originally intended not only to make human experimentation more ethical but also to raise its epistemic quality and intensify the use of new clinical research methods. By examining complex negotiations over the appropriate governance of human subjects research, Ethics by Committee is an important contribution to our understanding of the randomized controlled trial and the history of research ethics and bioethics more generally.
AUTHOR BIOGRAPHY
Noortje Jacobs is a historian in the Department of Medical Ethics, Philosophy, and History of Medicine at the Erasmus University Medical Center in Rotterdam, Netherlands.
REVIEWS
"An important new contribution to the history of bioethics and research ethics. Jacobs does more than simply fill a historiographical gap: the focus on the Netherlands allows her to convincingly argue that bioethics and research ethics do not have a singular history, and that we need to examine the historically specific interplay between medicine, society, and the state if we want to explain developments in specific times and places. Her insights and conclusions significantly add to our understanding of the mechanisms and schools of thought in medicine, philosophy, and politics that caused research ethics and bioethics more broadly to become global phenomena in recent decades."
— Duncan Wilson, University of Manchester