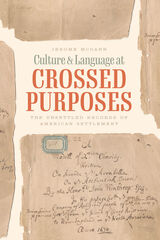 Culture and Language at Crossed Purposes unpacks the interpretive problems of colonial treaty-making and uses them to illuminate canonical works from the period.

Classic American literature, Jerome McGann argues, is haunted by the betrayal of seventeenth- and eighteenth-century Indian treaties—“a stunned memory preserved in the negative spaces of the treaty records.” A noted scholar of the “textual conditions” of literature, McGann investigates canonical works from the colonial period, including the Arbella sermon and key writings of William Bradford, John Winthrop, Anne Bradstreet, Cotton Mather’s Magnalia, Benjamin Franklin’s celebrated treaty folios and Autobiography, and Thomas Jefferson’s Notes on the State of Virginia. These are highly practical, purpose-driven works—the record of Enlightenment dreams put to the severe test of dangerous conditions. McGann suggests that the treaty-makers never doubted the unsettled character of what they were prosecuting, and a similar conflicted ethos pervades these works. Like the treaty records, they deliberately test themselves against stringent measures of truth and accomplishment and show a distinctive consciousness of their limits and failures. McGann’s book is ultimately a reminder of the public importance of truth and memory—the vocational commitments of humanist scholars and educators.
AUTHOR BIOGRAPHY
Jerome McGann is University Professor Emeritus at the University of Virginia and visiting research professor at the University of California, Berkeley.  He is a director of the online editorial project “Jaime de Angulo’s Old Time Stories: Voice, Text, Image.”
REVIEWS
“Bradford, Winthrop, Bradstreet, Mather, Franklin, Jefferson—over one hundred years of North American colonial treaty-making. McGann has spent the last decade studying early American texts, but this book reflects an entire career of fierce reading. Culture and Language at Crossed Purposes is an exercise in accuracy, thoroughness, and candor, the values that McGann calls for in scholarship today. His enduring concern with method makes this an important book for readers in the humanities more broadly.”
— Anna Brickhouse, author of 'The Unsettlement of America'

“Culture and Language at Crossed Purposes is a sophisticated rethinking of both the American literary tradition and the methods that have been used to study it. There is a lesson in this book for those who would study truth and beauty today: study of the human record requires a rigor tempered with a profoundly human sense of the failure immanent to the historiographical enterprise.”
— Matt Cohen, author of 'Colonial Mediascapes'

Part II. Secular Enlightenment: The Importance of Failure
8: Franklin’s Autobiography: Composition as Explanation
9: The Education of Thomas Jefferson
Interchapter 2. The End of Kaswentha: A Brief History