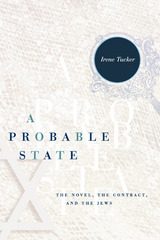 Why has the realist novel been persistently understood as promoting liberalism? Can this tendency be reconciled with an equally familiar tendency to see the novel as a national form? In A Probable State, Irene Tucker builds a revisionary argument about liberalism and the realist novel by shifting the focus from the rise of both in the eighteenth century to their breakdown at the end of the nineteenth. Through a series of intricate and absorbing readings, Tucker relates the decline of realism and the eroding logic of liberalism to the question of Jewish characters and writers and to shifting ideas of community and nation.

Whereas previous critics have explored the relationship between liberalism and the novel by studying the novel's liberal characters, Tucker argues that the liberal subject is represented not merely within the novel, but in the experience of the novel's form as well. With special attention to George Eliot, Henry James, Oliver Wendell Holmes, and S. Y. Abramovitch, Tucker shows how we can understand liberalism and the novel as modes of recognizing and negotiating with history.
AUTHOR BIOGRAPHY
Irene Tucker is an assistant professor of English at Johns Hopkins University.
TABLE OF CONTENTS


Acknowledgments
Introduction
1. Writing a Place for History: Daniel Deronda and the Fictions of Belief
2. What Maisie Promised: Realism, Liberalism, and the Ends of Contract
3. Speaking Worlds: S. Y. Abramovitch and the Making of Hebrew Vernacular
Bibliography
Index