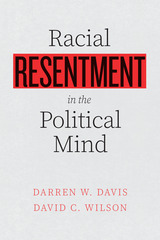 A thought-provoking look at how racial resentment, rather than racial prejudice alone, motivate a growing resistance among whites to improve the circumstances faced by racial minorities.

In Racial Resentment in the Political Mind, Darren W. Davis and David C. Wilson challenge the commonly held notion that all racial negativity, disagreements, and objections to policies that seek to help racial minorities stem from racial prejudice. They argue that racial resentment arises from just-world beliefs and appraisals of deservingness that help explain the persistence of racial inequality in America in ways more consequential than racism or racial prejudice alone.

The culprits, as many White people see it, are undeserving people of color, who are perceived to benefit unfairly from, and take advantage of, resources that come at Whites’ expense—a worldview in which any attempt at modest change is seen as a challenge to the status quo and privilege. Yet, as Davis and Wilson reveal, many Whites have become racially resentful due to their perceptions that African Americans skirt the “rules of the game” and violate traditional values by taking advantage of unearned resources. Resulting attempts at racial progress lead Whites to respond in ways that retain their social advantage—opposing ameliorative policies, minority candidates, and other advancement on racial progress. Because racial resentment is rooted in beliefs about justice, fairness, and deservingness, ordinary citizens, who may not harbor racist motivations, may wind up in the same political position as racists, but for different reasons.
AUTHOR BIOGRAPHY
Darren W. Davis is the Snyder Family Mission Professor at the University of Notre Dame. He is coauthor of Perseverance in the Parish? Religious Attitudes from a Black Catholic Perspective and Negative Liberty: Public Opinion and the Terrorist Attacks on America. David C. Wilson is professor of political science and psychological and brain sciences at the University of Delaware and senior associate dean for the social sciences.
REVIEWS
“In this timely contribution, Davis and Wilson set out to update and refine a core idea in the study of racial attitudes over the last few decades: racial resentment. Their work fills a long-standing gap in the literature on racial attitudes, and it will be of great interest to all those interested in American politics, political psychology, and the study of race, ethnicity, and politics.”
— Christopher M. Federico, University of Minnesota

“Racial Resentment in the Political Mind is a masterful recasting of racial resentment from an exclusive focus on Whites’ prejudice toward Blacks to a broader, richer concept focusing on feelings of injustice among Blacks as well as Whites. Based on a thoroughly updated theoretical and political foundation, the measure of racial resentment developed by Davis and Wilson is not just psychometrically elegant but also a powerful explanation of the many grievances felt by supporters of Donald Trump and the contemporary racial divide in the US.”
— Mark Peffley, Research Professor, University of Kentucky

"In grounding racial resentment in concerns about justice, fairness, and deservingness and in pressuring us to see it as actual resentment, Davis and Wilson have expanded the value of racial resentment for understanding the role of race in politics and in society more broadly. This is a book for graduate courses in race, and it belongs on the desk of everyone doing research on racial attitudes."
— Ethnic and Racial Studies