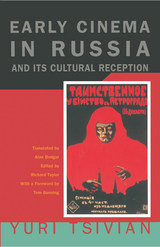 University of Chicago Press, 1998
Paper: 978-0-226-81426-1
Early Cinema in Russia chronicles one of the great lost periods in cinema history, that of Pre-Revolutionary Russia. In contrast to standard film histories, Yuri Tsivian focuses on reflected images: it features the historical film-goer and early writings on film as well as examining the physical elements of cinematic performance.

"Tsivian casts a probing beam of illumination into some of the most obscure areas of film history. And the terrain he lights up with his careful assembly and insightful reading of the records of early film viewing in Russia not only changes our sense of the history of this period but also . . . causes us to re-evaluate some of our most basic theoretical and historical assumptions about what a film is and how it affects its audiences."—Tom Gunning, from the Foreword

"Early Cinema in Russia . . . reveals Tsivian's strengths very well and demonstrates why he is . . . the finest film historian of his generation in the former Soviet Union."—Denise Y. Youngblood, Historical Journal of Film, Radio, and Television

"A work of fundamental importance."—Julian Graffy, Recent Studies of Russian and Soviet Cinema
TABLE OF CONTENTS


List of illustrations
General editors' preface
Acknowledgments
Abbreviations
Note on transliteration, translation and the Russian calendar
Foreword
Tom Gunning
Introduction
Part I
1. Early cinema architecture and the evolution of the social composition of cinema
2. Projection technique as a factor in aesthetic perception
3. The acoustics of cinema performance
4. The reception of interference
Part II
5. Shifting textual boundaries
6. The reception of the moving image
7. The reception of narrative categories
8. The receptions of narrative devices
Postscript
Notes
Bibliography
Index