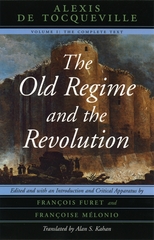 The Old Regime and the Revolution, Volume I: The Complete Text
by Alexis de Tocqueville
translated by Alan S. Kahan
edited by François Furet and Francoise Melonio

The Old Regime and the Revolution is Alexis de Tocqueville's great meditation on the origins and meanings of the French Revolution. One of the most profound and influential studies of this pivotal event, it remains a relevant and stimulating discussion of the problem of preserving individual and political freedom in the modern world. Alan Kahan's translation provides a faithful, readable rendering of Tocqueville's last masterpiece, and includes notes and variants which reveal Tocqueville's sources and include excerpts from his drafts and revisions. The introduction by France's most eminent scholars of Tocqueville and the French Revolution, Françoise Mélonio and the late François Furet, provides a brilliant analysis of the work.
AUTHOR BIOGRAPHY
Alan S. Kahan is an associate professor in the history department at Florida International University and the author of Aristocratic Liberalism and Liberalism in Nineteeth-Century Europe.
TABLE OF CONTENTS