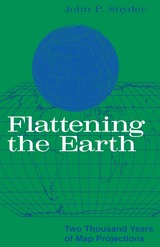 As long as there have been maps, cartographers have grappled with the impossibility of portraying the earth in two dimensions. To solve this problem mapmakers have created hundreds of map projections, mathematical methods for drawing the round earth on a flat surface. Yet of the hundreds of existing projections, and the infinite number that are theoretically possible, none is perfectly accurate.

Flattening the Earth is the first detailed history of map projections since 1863. John P. Snyder discusses and illustrates the hundreds of known projections created from 500 B.C. to the present, emphasizing developments since the Renaissance and closing with a look at the variety of projections made possible by computers.

The book contains 170 illustrations, including outline maps from original sources and modern computerized reconstructions. Though the text is not mathematically based, a few equations are included to permit the more technical reader to plot some projections. Tables summarize the features of nearly two hundred different projections and list those used in nineteenth-and twentieth-century atlases.

"This book is unique and significant: a thorough, well-organized, and insightful history of map projections. Snyder is the world's foremost authority on the subject and a significant innovator in his own right."—Mark Monmonier, author of How to Lie with Maps and Mapping It Out: Expository Cartography for the Humanities and Social Sciences.
TABLE OF CONTENTS