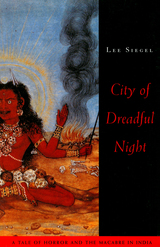 When Lee Siegel went to India to do research for a book on Sanskrit horror literature, a friend in New Delhi told him about an itinerant teller of ghost and vampire tales, a man with clusters of amulets around his neck and a silk top hat with peacock plumes on his head. Siegel set out in search of the old man—called Brahm Kathuwala—to hear his stories and to learn about his uncommon life.

But what started out as a study of other people's stories became a compelling story itself. City of Dreadful Night is an astonishing work of fiction, a tangle of tales that transports the reader from the Medieval India of magicians, witches, and vampires, through the British India of Brahm Kathuwala's childhood, into the chaos and political terror of contemporary India. Vividly recreating Indian literary and oral traditions, Siegel weaves a web of possession, reincarnation, and magical transformation unlike any found in the Western tradition. Flesh-eating demons, Rajiv Gandhi's assassin, even Bram Stoker and Dracula populate the serpentine narrative, which intermingles stories about the characters with the terrifying tales they tell.

Siegel pursues Brahm Kathuwala from the ghastly lights of the cremation ground at Banaras through villages all over north India. Brahm's life story is revealed through countless tales along the way. We learn that he was raised, and abandoned, by two mothers—one the destitute floor sweeper who bore him; the other her employer, a wealthy Irish woman who read and reread to him the story of Dracula. We hear of his marriage to the daughter of a cremation ground attendant, his battles against her demonic possession, and their painful parting. We come to understand the daily life and motivations of this "horror professional," who uses terrifying tales to ward off the evil he himself fears.

This unorthodox book is more than a story; it blends scholarship, fantasy, travelogue, and autobiography—fusing and overlapping historical accounts and newscasts, literary texts and films, dreams and nocturnal tales. Siegel uses imagination to explore the relation of real terror to horror fiction and to contemplate the ways fear and disgust become thrilling elements in stories of the macabre.

This book is the product of Siegel's deep knowledge of both Indian and Western literary and philosophical traditions. It is also an attempt to come to grips with the omnipresence of political and religious terror in contemporary India. Shocking, original, beautifully written, City of Dreadful Night offers readers a captivating immersion in the wonder and terror of India, past and present.
TABLE OF CONTENTS
1
2
3
4
5
6
7
Acknowledgments
REQUEST ACCESSIBLE FILE