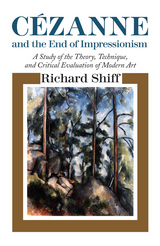 Drawing on a broad foundation in the history of nineteenth-century French art, Richard Shiff offers an innovative interpretation of Cézanne's painting. He shows how Cézanne's style met the emerging criteria of a "technique of originality" and how it satisfied critics sympathetic to symbolism as well as to impressionism. Expanding his study of the interaction of Cézanne and his critics, Shiff considers the problem of modern art in general. He locates the core of modernism in a dialectic of making (technique) and finding (originality). Ultimately, Shiff provides not only clarifying accounts of impressionism and symbolism but of a modern classicism as well.
TABLE OF CONTENTS


List of Illustrations
Acknowledgments
Preface
Part One - The End of Impressionism
1. Introduction: The Subjectivity of Impressionism
2. Defining "Impressionism" and the "Impression"
3. Impressionism, Truth, and Positivism
4. The Subject/Object Distinction, Critical Evaluation, and Technical Procedure
5. Impressionism and Symbolism as Modes of Artistic Expression
Part Two - The Technique of Originality
6. Introduction: Matisse and Origins: Impressionism as "Modernism": Making and Finding
7. Academics and Independents: Theories of Making and Theories of Finding
8. Corot, Monet, Cézanne, and the Technique of Originality
9. Bernard and Denis Meet Cézanne: Classical Tradition without Technical Convention
10. Roger Fry: Found Vision and Made Design
Part Three - Seeing Cézanne
11. Introduction: "Postimpressionism" and Expression
12. Cézanne Legend
13. The Poussin Legend
14. Did Cézanne Have a Theory?
15. Cézanne's Practice
Part Four - Conclusion: Making a Find
Making a Find
Notes
Index