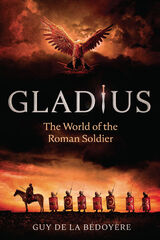 Gladius delivers a stunning ground-level recreation of what it was like to be a soldier in the fighting force that made the Roman Empire.
Empire.

The Roman army was the greatest fighting machine in the ancient world. More than that, it was the single largest organization in Western antiquity, taking in members from all classes, from  senators to freed slaves. The Roman Empire depended on its army not just to win its wars, defend its frontiers, and control the seas, but to act as the very engine of the state.

In Gladius, Guy de la Bédoyère takes us straight to the heart of what it meant to be a part of the Roman army. Rather than a history of the army itself, or a guide to military organization and fighting methods, this book is a ground-level recreation of what it was like to be a soldier in the army that made the empire. Surveying numerous aspects of life in the Roman army between 264 BCE and 337 CE, Gladius—the Latin word for sword—draws not only on the words of famed Roman historians, but also those of the soldiers  themselves, as recorded in their religious dedications, tombstones, and even private letters and graffiti. Gladius reveals the everyday life  of these soldiers and their families, whether stationed in a bleak frontier garrison in Britain or North Africa, tasked with guarding the emperor in Rome, fighting on foreign battlefields, mutinying over pay, marching in triumph, throwing their weight around on city streets, or enjoying esteem in honorable retirement.

By illuminating the history of one organization that reflected all corners of the Roman world, Gladius gives us a portrait of an ancient society that is unprecedented in both its broad sweep and gritty intimacy.
AUTHOR BIOGRAPHY
Guy de la Bédoyère is the author of many books about the Roman world and was a longtime cohost of Channel 4’s Time Team.
REVIEWS
“Gladius is a highly successful introduction to the life of the Roman soldier. Neither a history of the army nor a review of battlefield tactics, it instead studies daily life in military services far beyond the aspects of soldiering typically treated in history books. Making use of a wide range of sources, from stone inscriptions to colorful anecdotes, de la Bédoyère’s informative and readable book offers real immediacy to readers.”
— Clifford Ando, University of Chicago

“In his encyclopedic Gladius, Guy de la Bédoyère collects pretty much every fact known about what it was like to be in the military arm of the Roman Empire."
— Thomas E. Ricks, The New York Times Book Review

“Gladius is a necessary work for scholars of Roman history, but will also prove interesting and informative reading for the armchair historian.”
— New York Military Affairs Review

"A really splendid book that brings to life in its scholarship and animated style the lives of some of the most remarkable soldiers the world has ever seen. . . . [Gladius] will be an absolute delight for those who are fascinated by the life and achievements of the world’s first and probably greatest professional army."
— Military History Matters

1. Introduction—The Army of the Emperors

2. Strength and Honour—Signing On in Caesar’s Army

4. Gold and Silver—Pay, Handouts and Bequests

5. A Soldier’s Life—Garrisoning the Empire

6. Living Off the Land—The Roman Army and the Environment

8. I Came, I Saw, I Conquered—The Roman War Machine Victorious

9. Living by the Sword—Violence and Atrocities

11. Mutineers and Rebels—King-Makers for Sale

13. Leisure and Leave—Hunting Wild Boar and Other Diversions

14. Wives and Lovers—Family Life on the Frontier

Emperors from Augustus to Valentinian I and Valens

Tacitus and Dio on the Size of the Army