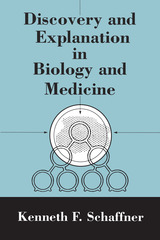 Kenneth F. Schaffner compares the practice of biological and medical research and shows how traditional topics in philosophy of science—such as the nature of theories and of explanation—can illuminate the life sciences. While Schaffner pays some attention to the conceptual questions of evolutionary biology, his chief focus is on the examples that immunology, human genetics, neuroscience, and internal medicine provide for examinations of the way scientists develop, examine, test, and apply theories.

Although traditional philosophy of science has regarded scientific discovery—the questions of creativity in science—as a subject for psychological rather than philosophical study, Schaffner argues that recent work in cognitive science and artificial intelligence enables researchers to rationally analyze the nature of discovery. As a philosopher of science who holds an M.D., he has examined biomedical work from the inside and uses detailed examples from the entire range of the life sciences to support the semantic approach to scientific theories, addressing whether there are "laws" in the life sciences as there are in the physical sciences. Schaffner's novel use of philosophical tools to deal with scientific research in all of its complexity provides a distinctive angle on basic questions of scientific evaluation and explanation.
TABLE OF CONTENTS