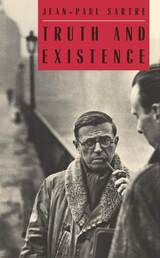 Truth and Existence, written in response to Martin Heidegger's Essence of Truth, is a product of the years when Sartre was reaching full stature as a philosopher, novelist, playwright, essayist, and political activist. This concise and engaging text not only presents Sartre's ontology of truth but also addresses the key moral questions of freedom, action, and bad faith.

Truth and Existence is introduced by an extended biographical, historical, and analytical essay by Ronald Aronson.

"Truth and Existence is another important element in the recently published links between Sartre's existentialist ontology and his later ethical, political, and literary concerns. . . . The excellent introduction by Aronson will help readers not experienced in reading Sartre."—Choice

Jean-Paul Sartre (1906-1980) was offered, but declined, the Nobel Prize for literature in 1964. His many works of fiction, drama, and philosophy include the monumental study of Flaubert, The Family Idiot, and The Freud Scenario, both published in translation by the University of Chicago Press.
TABLE OF CONTENTS