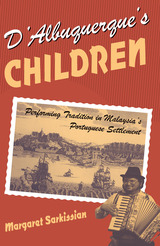 When the Portuguese seafarer Afonso de Albuquerque conquered the bustling port of Malacca in 1511, he effectively gained control of the entire South China Sea spice trade. Although their dominance lasted only 130 years, the Portuguese legacy lies at the heart of a burgeoning tourist attraction on the outskirts of the city, in which performers who believe they are the descendants of swashbuckling Portuguese conquerors encapsulate their "history" in a cultural stage show.

Using historical and ethnographic data, Margaret Sarkissian reveals that this music and dance draws on an eclectic array of influences that span the Portuguese diaspora (one song conjures up images of Lucille Ball impersonating Carmen Miranda on "I Love Lucy"). Ironically, she shows, what began as a literate tradition in the 1950s has now become an oral one so deeply rooted in Settlement life that the younger generation, like the tourists, now see it as an unbroken heritage stretching back almost 500 years. A fascinating case of "orientalism in reverse," D'Albuquerque's Children illuminates the creative ways in which one community has adapted to life in a postcolonial world.
AUTHOR BIOGRAPHY
Margaret Sarkissian is an associate professor of music at Smith College.
TABLE OF CONTENTS