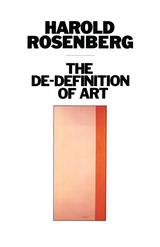 The De-Definition of Art
by Harold Rosenberg
University of Chicago Press, 1983
Paper: 978-0-226-72673-1
"Like the great German critic Walter Benjamin, Rosenberg is a master of dialectics whose sense of art is continuous with his sense of society, and (also like Benjamin) bears no taint of compromised, out-of-work radicalism. Instead, his radicalism is very much at work, enabling him to spot and skewer fallacies, false logic and the camouflaged nudity that is a large part of the art emperor's new wardrobe. [The De-definition of Art] detects with great sensitivity the forces that are deflecting and pressuring art in the direction of esthetic and moral nullity."—Jack Kroll, Newsweek
TABLE OF CONTENTS