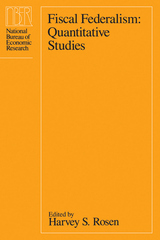 We often think of fiscal decisions as being made by a single government, but in the United States the reality is that an astounding number of entities have the power to tax and spend. State, local, and federal governments all play crucial roles in the U.S. fiscal system, and the interrelation has been the source of continuing controversy. This fact is the focus of the seven papers and commentaries presented in this volume, the result of a conference sponsored by the NBER. The contributors use various quantitative tools to study policy issues, obtaining results that will interest policymakers and researchers working in the areas of taxation and public finance.

The first three papers study the distribution of power and responsibilities among the various levels of government. John Joseph Wallis and Wallace E. Oates look at the extend and evolution of decentralization in the state and local sector; Robert P. Inman examines the growth of federal grants and the structure of congressional decision making; and Jeffrey S. Zax investigates the effects of the number of government jurisdictions on aggregate local public debt and expenditures. The next three papers look at the deductibility of state and local taxes on federal tax returns. Using an econometric analysis, Douglas Holtz-Eakin and Harvey S. Rosen examine the effects of deductibility on revenue sources and level of expenditures. Lawrence B. Lindsey looks at how deductibility affects the level and type of taxation. George R. Zodrow uses a two-sector general equilibrium model to investigate revenue effects of deductibility. Finally, Charles R. Hulten and Robert M. Schwab analyze the problem of developing an accurate estimate of income for the state and local sector, finding that conventional accounting procedures have underestimated the income generated by a startling $100 billion.
AUTHOR BIOGRAPHY
Harvey S. Rosen is professor of economics at Princeton University.
TABLE OF CONTENTS