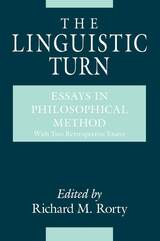 The Linguistic Turn: Essays in Philosophical Method
edited by Richard M. Rorty
University of Chicago Press, 1992
Paper: 978-0-226-72569-7
The Linguistic Turn provides a rich and representative introduction to the entire historical and doctrinal range of the linguistic philosophy movement. In two retrospective essays titled "Ten Years After" and "Twenty-Five Years After," Rorty shows how his book was shaped by the time in which it was written and traces the directions philosophical study has taken since.

"All too rarely an anthology is put together that reflects imagination, command, and comprehensiveness. Rorty's collection is just such a book."—Review of Metaphysics
AUTHOR BIOGRAPHY
Richard Rorty (1931-2007) was one of the world's most influential cultural philosophers. During the course of his academic career he taught at Wellesley College, Princeton University, the University of Virginia, and Stanford University.
TABLE OF CONTENTS

Part IV - Recapitulations, Reconsiderations, and Future Prospects
22. Dudley Shapere - Philosophy and the Analysis of Language
23. Stuart Hampshire - Are All Philosophical Questions Questions of Language?
24a. J. O. Urmson - The History of Analysis
24b. Discussion of Urmson's "The History of Analysis" (by the participants in the 1961 Royaumont Colloquium)
25a. P. F. Strawson - Analysis, Science, and Metaphysics
25b. Discussion of Strawson's "Analysis, Science and Metaphysics" (by the participants in the 1961 Royaumont Colloquium)
26. Max Black - Language and Reality
27. Jerrold J. Katz - The Philosophical Relevance of Linguistic Theory
28. Yehoshua Bar-Hillel - A Pre-Requisite for Rational Philosophical Discussion
Two Retrospective Essays by Richard M. Rorty
Ten Years After
Twenty-five Years After