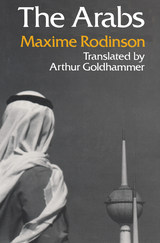 Maxime Rodinson has long been known in Europe as one of the foremost interpreters of Arab history and thought. In this concise overview of the Arab people and their distinctive culture, the author discusses the extend to which Arabs can be defined by religion, language, or race; surveys the Arab diaspora; examines modern Arab nationalism; and questions the degree to which it is possible to generalize about the Arab people and their "personality."
AUTHOR BIOGRAPHY
Maxime Rodinson is Directeur d'Etudes at l'Ecole pratique des hautes études at the Sorbonne.
TABLE OF CONTENTS


Preface
1. Who Are the Arabs?
2. The Nature and Growth of Arabhood
3. Arabism
4. Prospects and Pitfalls for the Arab World
5. Is a Comprehensive Portrait of the Arabs Possible?
Conclusion
Index