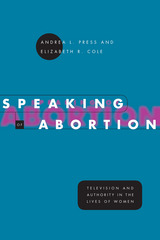 Over four years, Andrea Press and Elizabeth Cole watched television with women, visiting city houses, suburban subdivisions, modern condominiums, and public housing projects. They found that television depicts abortion as a problem for the poor and the working classes, and that viewers invariably referred to and abided by class when discussing abortion. Speaking of Abortion is an invaluable resource that allows us to hear how ordinary women discuss one of America's most volatile issues.
AUTHOR BIOGRAPHY
Andrea L. Press is a professor of communication and women's studies and directs the media studies program at the University of Illinois, Urbana-Champaign. She is the author of Women Watching Television: Gender, Class, and Generation in the American Television Experience.

Elizabeth R. Cole is an associate professor in women's studies and the Center for Afroamerican and African Studies at the University of Michigan.
TABLE OF CONTENTS


Preface
Acknowledgments
1. Introduction
Speaking of Abortion
2. The Classed Discourse of Abortion on Prime-Time Television
3. Reconciling Faith and Fact
The Pro-Life Perspective
4. Situating Self and Social Authority
Working-Class Pro-Choice Positions
5. The Shifting Context of Justification for Choice Among the Middle Class
6. Another American Dilemma
Locating Abortion on the Political Landscape
Appendix A: The Ethnographic Focus Group
Appendix B: Characteristics of the Groups
Notes
References
Index