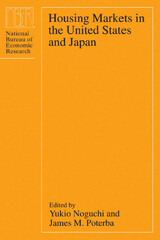 Although Japan and the United States are the world's leading economies, there are significant differences in the ways their wealth is translated into living standards. A careful comparison of housing markets illustrates not only how living standards in the two countries differ, but also reveals much about saving patterns and how they affect wealth accumulation.

In this volume, ten essays discuss the evolution of housing prices, housing markets and personal savings, housing finance, commuting, and the impact of public policy on housing markets. The studies reveal surprising differences in housing investment in the two countries. For example, because down payments in Japan are much higher than in the United States, Japanese tend to delay home purchases relative to their American counterparts. In the United States, the advent of home equity credit may have reduced private saving overall.