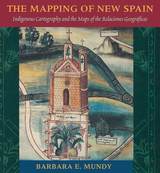 To learn about its territories in the New World, Spain commissioned a survey of Spanish officials in Mexico between 1578 and 1584, asking for local maps as well as descriptions of local resources, history, and geography. In The Mapping of New Spain, Barbara Mundy illuminates both the Amerindian (Aztec, Mixtec, and Zapotec) and the Spanish traditions represented in these maps and traces the reshaping of indigene world views in the wake of colonization.

"Its contribution to its specific field is both significant and original. . . . It is a pure pleasure to read." —Sabine MacCormack, Isis

"Mundy has done a fine job of balancing the artistic interpretation of the maps with the larger historical context within which they were drawn. . . . This is an important work." —John F. Schwaller, Sixteenth Century Journal

"This beautiful book opens a Pandora's box in the most positive sense, for it provokes the reconsideration of several long-held opinions about Spanish colonialism and its effects on Native American culture." —Susan Schroeder, American Historical Review
AUTHOR BIOGRAPHY
Barbara E. Mundy is an assistant professor of art history at Fordham University and a contributor to Volume 2, Book 3 of The History of Cartography.
TABLE OF CONTENTS