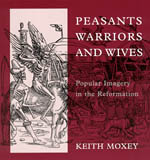 In Peasants, Warriors, and Wives, Keith Moxey examines woodcut images from the German Reformation that have often been ignored as a crude and inferior form of artistic production. In this richly illustrated study, Moxey argues that while they may not satisfy received notions of "art," they nevertheless constitute an important dimension of the visual culture of the period. Far from being manifestations of universal public opinion, as a cursory acquaintance with their subject matter might suggest, such prints were the means by which the reformed attitudes of the middle and upper classes were disseminated to a broad popular audience.
AUTHOR BIOGRAPHY
Keith Moxey is the Anne Whitney Olin Professor of Art History at Barnard College and Columbia University.
TABLE OF CONTENTS


List of Illustrations
Preface
Introduction
1. Nuremberg in the Sixteenth Century
2. The Media: Woodcuts and Broadsheets
3. Festive Peasants and Social Order
4. Mercenary Warriors and the "Rod of God"
5. The Battle of the Sexes and the World Upside Down
Conclusion
Notes
Index