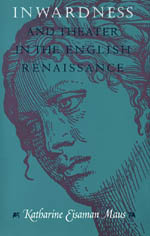 Katharine Eisaman Maus explores Renaissance writers' uneasy preoccupation with the inwardness and invisibility of truth. The perceived discrepancy between a person's outward appearance and inward disposition, she argues, deeply influenced the ways English Renaissance dramatists and poets conceived of the theater, imagined dramatic characters, and reflected upon their own creativity.

Reading works by Kyd, Marlowe, Shakespeare, Jonson, and Milton in conjuction with sectarian polemics, gynecological treatises, and accounts of criminal prosecutions, Maus delineates unexplored connections among religious, legal, sexual, and theatrical ideas of inward truth. She reveals what was at stake—ethically, politically, epistemologically, and theologically—when a writer in early modern England appealed to the difference between external show and interior authenticity. Challenging the recent tendency to see early modern selfhood as defined in wholly public terms, Maus argues that Renaissance dramatists continually payed homage to aspects of inner life they felt could never be manifested onstage.
TABLE OF CONTENTS


Acknowledgments
1: Introduction: Inwardness and Spectatorship
2: Machiavels and Family Men
3: Heretical Conscience and Theatrical Rhetoric: The Case of Christopher Marlowe
4: Proof and Consequences: Othello and the Crime of Intention
5: Prosecution and Sexual Secrecy: Jonson and Shakespeare
6: A Womb of His Own: Male Renaissance Poets in the Female Body
7: Conclusion
Index