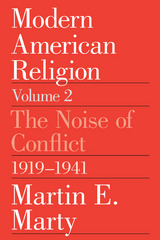 Not since the Civil War had America been so divided by conflict. Religion was the prime agent in this unusual war: Left versus Right, Fundamentalists versus Modernists; Christians versus Jews; Protestant versus Catholic; white versus black. In this volume, Martin E. Marty tells the riveting story of how America has survived religious disturbances and culturally prospered from them.

"He tells the story [of the 1920s and 1930s] with a verve seldom equaled and manages to condense in one volume the results of dozens of specialized monographs. . . . [It] bears the usual hallmarks of a Marty book: a smoothly flowing narrative, passages studded with suggestive insight inviting further research, and apt quotations that capture the gist of complicated issues. . . . [A] splendid book. . . . Deserves a wide readership and undoubtedly will receive it." —James H. Moorhead, Chicago Sunday Tribune

"There is simply no better source, certainly none so engaging, for the interactions of religion and the larger culture in the interwar period." —Robert Booth Fowler, Journal of American History

"[This book is] not merely a history of American religion, but what might better be called a religious history" —David M. Kennedy, New York Times Book Review
TABLE OF CONTENTS


Acknowledgments
1. Dire Was the Noise
2. Religious America's Search for Steadiness
3. The "100 Percent Americans" Attack
4. The Challenges of the Other Americans
5. The Protestant House Divided
6. A Sober Nation and a Warless World
7. Depression Extremism: Right with a Capital R, Left with a Capital L
8. The Age of Realism
9. The Entire Social and Political Field
Conclusion: After Conflict, Toward Consensus
Notes
Index