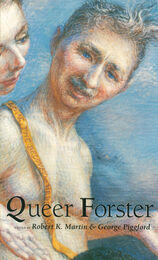 This groundbreaking volume presents a radical revision of gay criticism and focuses on E. M. Forster's place in the emerging field of queer studies.

Many previous critics of Forster downplayed his homosexuality or read Forster naively in terms of gay liberation. This collection situates Forster within the Bloomsbury Group and examines his relations to major figures such as Henry James, Edward Carpenter, and Virginia Woolf. Particular attention is paid to Forster's several accounts of India and their troubled relation to the British colonial enterprise. Analyzing a wide range of Forster's work, the authors examine material from Forster's undergraduate writings to stories written more than a half-century later.

A landmark book for the study of gender in literature, Queer Forster brings the terms "queer" and "gay" into conversation, opening up a dialogue on wider dimensions of theory and allowing a major revaluation of modernist inventions of sexual identity.
TABLE OF CONTENTS


Preface
Abbreviations
1: Introduction: Queer, Forster?
Robert K. Martin, George Piggford.
2: "Queer Superstitions": Forster, Carpenter, and the Illusion of (Sexual) Identity
Gregory W. Bredbeck
3: "Thinking about Homosex" in Forster and James
Eric Haralson
4: The Mouse That Roared: Creating a Queer Forster
Christopher Reed
5: Camp Sites: Forster and the Biographies of Queer Bloomsbury
George Piggford
6: Fratrum Societati: Forster's Apostolic Dedications
Joseph Bristow
7: "This is the End of Parsival": The Orphic and the Operatic in The Longest Journey
Judith Scherer Herz
8: Breaking the Engagement with Philosophy Re-envisioning Hetero/Homo Relations in Maurice
Debrah Raschke
9: Betrayal and Its Consolations in Maurice, "Arthur Snatchfold," and "What Does It Matter? A Morality"
Christopher Lane
10: "Contrary to the Prevailing Current"? Homoeroticism and the Voice of Maternal Law in "The Other Boat"
Tamera Dorland
11: To Express the Subject of Friendship: Masculine Desire and Colonialism in A Passage to India
Charu Malik
12: Colonial Queer Something
Yonatan Touval
13: "It Must Have Been the Umbrella": Forster's Queer Begetting
Robert K. Martin
Works Cited
Contributors
Index of Forster's Works
General Index