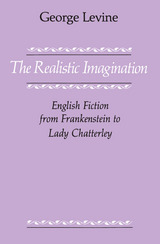 In The Realistic Imagination, George Levine argues that the Victorian realists and the later modernists were in fact doing similar things in their fiction: they were trying to use language to get beyond language. Levine sees the history of the nineteenth- and early twentieth-century novel as a continuing process in which each generation of writers struggled to escape the grip of convention and attempted to create new language to express their particular sense of reality. As these attempts hardened into new conventions, they generated new attempts to break free.
AUTHOR BIOGRAPHY
George Levine is professor and chairman of the English Department at Rutgers University.
TABLE OF CONTENTS


Acknowledgments
Part One: Introduction - Idea, Reality, and the Monster
1. Realism
2. The Pattern
Frankenstein and Austen to Conrad
Part Two: Pre-Victorian Realism - Banishing the Monster
3. Northanger Abbey
From Parody to Novel and the Translated Monster
4. Sir Walter Scott
History and the Distancing of Desire
5. Scott and the Death of the Hero
Part Three: Mid-Victorian Realism - Conventions of the Real
6. Thackeray
"The Legitimate High Priest of Truth" and the Problematics of the Real
7. Thackeray
Some Elements of Realism
8. Pendennis
The Virtue of the Dilettante's Unbelief
9. Trollope
Reality and the Rules of the Game
10. The Landscape of Reality
Part Four: Transformations of Reality
11. Thomas Hardy's The Mayor of Casterbridge
Reversing the Real
12. George Eliot, Conrad, and the Invisible World
13. The Hero as Dilettante
Middlemarch and Nostromo
Epilogue
Lawrence, Frankenstein, and the Reversal of Realism
Notes
Index