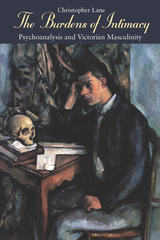 Why does passion bewilder and torment so many Victorian protagonists? And why do so many literary characters experience moments of ecstasy before their deaths? In this original study, Christopher Lane shows why Victorian fiction conveys both the pleasure and anguish of intimacy. Examining works by Bulwer-Lytton, Swinburne, Schreiner, Hardy, James, Santayana, and Forster, he argues that these writers struggled with aspects of psychology that were undermining the utilitarian ethos of the Victorian age.

Lane discredits the conservative notion that Victorian literature expresses only a demand for repression and moral restraint. But he also refutes historicist and Foucauldian approaches, arguing that they dismiss the very idea of repression and end up denouncing psychoanalysis as complicit in various kinds of oppression. These approaches, Lane argues, reduce Victorian literature to a drama about politics, power, and the ego. Striving instead to reinvigorate discussions of fantasy and the unconscious, Lane offers a clear, often startling account of writers who grapple with the genuine complexities of love, desire, and friendship.


Acknowledgments
Preface
Introduction: Victorian Asymmetry: The Study of Repression and Desire
1: The Specter of Effeminacy in Bulwer-Lytton's Pelham
2: Love's Vicissitudes in Swinburne's Lesbia Brandon
3: "Gregory's Womanhood" in Schreiner's The Story of an African Farm
4: Hardy and the Claims of Friendship
5: The Impossibility of Seduction in James's Roderick Hudson and The Tragic Muse
6: Santayana and the Problem of Beauty
7: Betrayal and Its Consolations in Forster's Writing
Afterword: The Homosexual in the Text
Notes
Works Cited
Index