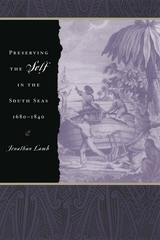 The violence, wonder, and nostalgia of voyaging are nowhere more vivid than in the literature of South Seas exploration. Preserving the Self in the South Seas charts the sensibilities of the lonely figures that encountered the new and exotic in terra incognita. Jonathan Lamb introduces us to the writings of South Seas explorers, and finds in them unexpected and poignant tales of selves alarmed and transformed.

Lamb contends that European exploration of the South Seas was less confident and mindful than we have assumed. It was, instead, conducted in moods of distraction and infatuation that were hard to make sense of and difficult to narrate, and it prompted reactions among indigenous peoples that were equally passionate and irregular. Preserving the Self in the South Seas also examines these common crises of exploration in the context of a metropolitan audience that eagerly consumed narratives of the Pacific while doubting their truth. Lamb considers why these halting and incredible journals were so popular with the reading public, and suggests that they dramatized anxieties and bafflements rankling at the heart of commercial society.
AUTHOR BIOGRAPHY
Jonathan Lamb is a professor of English at Princeton University. He is the author, most recently, of The Rhetoric of Suffering: Reading the Book of Job in the Eighteenth Century and coeditor of Exploration and Exchange: A South Seas Anthology, 1680-1900 and Voyages and Beaches: Pacific Encounters, 1769-1840.
TABLE OF CONTENTS


List of Illustrations
Acknowledgments
PART I: THE ROMANCING OF THE CIVIL SELF
Introduction
1. Political Theories of the Self
2. The Romance of Navigation
3. Science and Collecting
4. Scurvy
5. The Polynesian Person and the Spread of Leprosy
PART II: FROM JUAN FERNANDEZ TO NEW ZEALAND
6. Void Contracts and Subtle Islands
7. Patriots in Paradise
8. Starlings and Parrots; Keate and Sympathy
9. The Settlement of New Zealand
References
Index