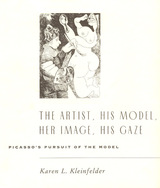 The Artist, His Model, Her Image, His Gaze: Picasso's Pursuit of the Model
by Karen L. Kleinfelder
University of Chicago Press, 1993
Cloth: 978-0-226-43983-9
Although Pablo Picasso's name is virtually synonymous with modernity, his late graphics repeatedly turn back to the traditional theme of the artist and model. Had the aging artist turned reactionary, or is Picasso's treatment of the theme more subversive than anyone has suspected?

In this innovative study, Karen L. Kleinfelder rejects the claim that Picasso's later work was a failure. The failing, she claims, lies more in the way we typically have read the images, treating them merely as reflections of an "old-age" style or of the artist's private life.

Focusing on graphics dating from 1954 to 1970, Kleinfelder shows how Picasso plays with the artist-model theme to extend, subvert, and parody both the possibilities and limits of representation. For Kleinfelder, Picasso's graphic work both mystifies and demystifies the creative process, venerates and mocks the effects of aging and the artist's self-image as a living "old master," and acknowledges and denies his own fear of death.

Using recent interpretive and literary theory, Kleinfelder probes the three-way relationship between artist, model, and canvas. The dynamics of this relationship provided Picasso with an open-ended textual framework for exploring the dichotomies of man/woman, self/other, and vitality/mortality. What unfolds is the artist's struggle not only with the impossibility of representing the model on canvas, but also with the inevitability of his own death.

Kleinfelder explores how Picasso's means of pursuing these issues allows him to defer closure on a long, productive career. By focusing on the graphics rather than the paintings, Kleinfelder contradicts the primacy of the painted "masterpiece"; she steers the reader away from the assumption that the artist must work toward creating a final body of work that signifies the culmination of his search for a coherent identify.

Picasso's search, she argues, realizes itself in the creative process. She interprets the late graphics not as a biographical statement but as a tool for investigating the possibilities of representation within the limits of Picasso's medium and his lifetime. Richly illustrated, Kleinfelder's book will open up new approaches to the late work of this complex artist.


List of Illustrations
Acknowledgments
Introduction: Framing the Theme and Opening the Text
1. Through a Self-Reflexive Frame: The Theme in Theory
2. From Barrier to Bridge to Body: The Canvas Threshold
3. Portrait of the Artist as an Old Man: The "Human Comedy"
4. Desire and Its Discourse: The Theme in Extension
Coda Interruptus: "Desire not Caught by the Tail"
Notes
Bibliography
Index