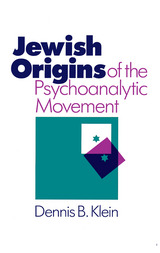 Jewish Origins of the Psychoanalytic Movement
by Dennis B. Klein
University of Chicago Press, 1985
Paper: 978-0-226-43960-0
Dennis B. Klein explores the Jewish consciousness of Freud and his followers and the impact of their Jewish self-conceptions on the early psychoanalytic movement. Using little-known sources such as the diaries and papers of Freud's protégé Otto Rank and records of the Vienna B'nai B'rith that document Freud's active participation in that Jewish fraternal society, Klein argues that the feeling of Jewish ethical responsibility, aimed at renewing ties with Germans and with all humanity, stimulated the work of Freud, Rank, and other analysts and constituted the driving force of the psychoanalytic movement.
AUTHOR BIOGRAPHY
Dennis B. Klein is director of the Center for Holocaust Studies of the Anti-Defamation League of B'nai B'rith. He has published numerous scholarly articles in European and Jewish history.
TABLE OF CONTENTS


Acknowledgments
Preface, 1985
Introduction
1. Assimilation and Dissimilation
The Situation in Vienna
Self-Determination
A Jewish Task
2. Freud and the Psychology of Movement
Godless, but Ethical—and German
Encounter with Anti-Semitism
Koller, Breuer, and the Society of Physicians
3. The Prefiguring of the Psychoanalytic Movement: Freud and the B'nai B'rith
Forging a Jewish Bond
The B'nai B'rith in Vienna
A New Forum for Movement
4. The Psychology of the Follower: Otto Rank
The Art of Psychoanalysis
Nietzsche as Surrogate Father
A Radical Cure of Neurosis
5. Conclusion
A Jewish Movement
The Particular and the Universal
Appendix A. Lectures Freud Presented to the B'nai B'rith, 1897-1917
Appendix B. Otto Rank: A Chronology
Appendix C. Translation of Otto Rank's "Das Wesen Des Judentums" ("The Essence of Judaism")
Bibliography
Index
About the Author