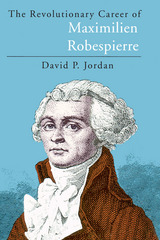 The Revolutionary Career of Maximilien Robespierre
by David P. Jordan
University of Chicago Press, 1989
Paper: 978-0-226-41037-1
As it changed forever the political landscape of the modern world, the French Revolution was driven by a new type of personality: the confirmed, self-aware revolutionary. Maximilien Robespierre originated the role and embodied its ideological essence and extremes; the self that he projected to the people was equated with the ideals for which he strove. In creating this intellectual biography of so enigmatic a figure, David Jordan has stressed the words of the man about himself. With great imagination and insight, Jordan places Robespierre's self-conceptualization within the context of events and explains how Robespierre "The Incorruptible"—a man seen by contemporaries as virtuous—could not only equate justice with vengeance and demand it of the people, but also stand as its symbol before the world.
TABLE OF CONTENTS


List of Illustrations
Acknowledgments
Prologue
1. The Memory of a Tyrant
2. The Revolutionary Revealed
3. Representative of the People
4. Robespierre the Orator
5. The War Debates
6. Conversion to Insurrection
7. The King's Trial
8. Purging the Convention
9. Robespierre the Ideologue
10. The Committee of Public Safety
11. A Mortal Blow to Fanaticism
12. Thermidor
13. The Incorruptible
Epilogue
Appendix: Portraits of Robespierre
Notes
List of Works Cited
Index