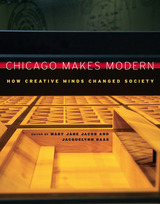 Chicago is a city dedicated to the modern—from the skyscrapers that punctuate its skyline to the spirited style that inflects many of its dwellings and institutions, from the New Bauhaus to Hull-House. Despite this, the city has long been overlooked as a locus for modernism in the arts, its rich tradition of architecture, design, and education disregarded. Still the modern in Chicago continues to thrive, as new generations of artists incorporate its legacy into fresh visions for the future. Chicago Makes Modern boldly remaps twentieth-century modernism from our new-century perspective by asking an imperative question: How did the modern mind—deeply reflective, yet simultaneously directed—help to dramatically alter our perspectives on the world and make it new?

Returning the city to its rightful position at the heart of a multidimensional movement that changed the face of the twentieth century, Chicago Makes Modern applies the missions of a brilliant group of innovators to our own time. From the radical social and artistic perspectives implemented by Jane Addams, John Dewey, and Buckminster Fuller to the avant-garde designs of László Moholy-Nagy and Mies van der Rohe, the prodigious offerings of Chicago's modern minds left an indelible legacy for future generations. Staging the city as a laboratory for some of our most heralded cultural experiments, Chicago Makes Modern reimagines the modern as a space of self-realization and social progress—where individual visions triggered profound change. Featuring contributions from an acclaimed roster of contemporary artists, critics, and scholars, this book demonstrates how and why the Windy City continues to drive the modern world.

Mary Jane Jacob is a curator, professor of sculpture and executive director of exhibitions and exhibition studies at the School of the Art Institute of Chicago, and coeditor of The Studio Reader. Jacquelynn Baas isdirector emeritus of the University of California Berkeley Art Museum and Pacific Film Archive. She previously served as director of the Hood Museum of Art and is the author or editor of numerous publications, including, most recently, Fluxus and the Essential Questions of Life. Together, they are coeditors of Buddha Mind in Contemporary Art and Learning Mind: Experience into Art.