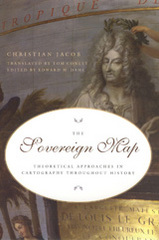 University of Chicago Press, 2006
Cloth: 978-0-226-38953-0
A novel work in the history of cartography, The Sovereign Map argues that maps are as much about thinking as seeing, as much about the art of persuasion as the science of geography. As a classicist, Christian Jacob brings a fresh eye to his subject—which includes maps from Greek Antiquity to the twentieth century—and provides a theoretical approach to investigating the power of maps to inform, persuade, and inspire the imagination.

Beginning with a historical overview of maps and their creation—from those traced in the dirt by primitive hands to the monumental Dutch atlases and ornate maps on Italian palace walls—Jacob goes on to consider the visual components of cartography: the decorative periphery, geometric grid, topographical lines, dots, details of iconographic figures, and many other aspects. Considering text on maps—titles, toponyms, legends, and keys—Jacob proposes that writing can both clarify and interfere with a map's visual presentation. Finally Jacob examines the role of the viewer in decoding a map's meaning and the role of society in defining the power of maps as authoritative depictions of space.

Innovative in its philosophical motivation and its interdisciplinary approach to looking at and writing about maps, The Sovereign Map is eagerly awaited by scholars from many different fields.
AUTHOR BIOGRAPHY
Christian Jacob is directeur de recherche at the Centre national de la recherche scientifique in Paris. Edward H. Dahl is the former early cartography specialist at the National Archives of Canada. Tom Conley is professor of Romance languages and literatures at Harvard University.
REVIEWS
"An encyclopedic book of striking erudition un which virtually every visible element in the nature and composition of maps is put under the microscope of [Jacob's] informed intellect."
— George Falconer, Geomatica

"This is a very heavy and phiosophical work, but one of the most important to be published recently dealing with maps."
— J.B. Post, The Portolan

"A significant book that is likely . . . to have a major impact within the scholarly worlds it has both studied and extended."
— Charles W. J. Withers, Canadian Journal of History

“Important in that it contributes to a literature weak in theoretical analysis of early maps.”
— Choice

"An important addition to the literature and one that will certainly shape Anglophone scholarship on the history of cartography."
— Susan Schulten, Isis

"Cartography plays a central role in knowledge integration in the twenty-first century, and this book provides a valuable historical building block for research on this important topic. . . . The Sovereign Map remains one of the most important contributions to an understanding of maps and mapping in recent years and should be required reading for all cartographers."
— D.R. Fraser Taylor, Cartographia

"The author and his translators have considerably expanded our ability to discuss what maps do and how they change."
— Bruce Fetter, Journal of Interdisciplinary History

"This is a wonderful book. I think it shows through a careful historical reading how cartography has not been a mad project to achieve the unachievable; rather it has always been both the product and the driver of the thinking in particular places and times where each map was made."
— Danny Dorling, H-Net Book Review

"This is a profound and important book. . . . In no way should it be seen as a history of cartography; it is rather a prolonged reflection on the philosophy of the map, how it is viewed by creator and user, how it achieves its purposes, how it communicates at every level of meaning, deliberately or unconsciously, how it displays or hides the various messages that it conveys."
— P.D.A. Harvey, IMCoS Journal

"The range of this volume remains extraordinary. . . . This gives Jacob an extraordinarily generous space for exploration. The result is a remarkable piece of scholarship."
— A.H. Merrills, American Historical Review

"It would be a great shame if this book were read only by cartographers. . . . The Sovereign Map is essentially a book about the construction of knowledge, the uses of power, and the geography of representations. As such it deserves a wide audience. . . . A book that is likely to be [a] significant point of reference and inspiration."
— Stuart Elden, Environment and Planning


List of Illustrations
Preface to the English Language Edition
Acknowledgments

Introduction: Between the Lines of the Map