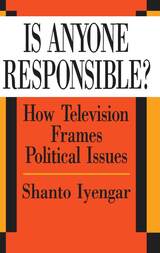 A disturbingly cautionary tale, Is Anyone Responsible? anchors with powerful evidence suspicions about the way in which television has impoverished political discourse in the United States and at the same time molds American political consciousness. It is essential reading for media critics, psychologists, political analysts, and all the citizens who want to be sure that their political opinions are their own.

"Not only does it provide convincing evidence for particular effects of media fragmentation, but it also explores some of the specific mechanisms by which television works its damage. . . . Here is powerful additional evidence for those of us who like to flay television for its contributions to the trivialization of public discourse and the erosion of democratic accountability."—William A. Gamson, Contemporary Sociology

"Iyengar's book has substantial merit. . . . [His] experimental methods offer a precision of measurement that media effects research seldom attains. I believe, moreover, that Iyengar's notion of framing effects is one of the truly important theoretical concepts to appear in recent years."—Thomas E. Patterson, American Political Science Review
TABLE OF CONTENTS